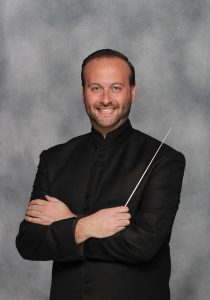 Mr. Ross is entering his second year as Director of Bands of Jupiter High School and was the former Band Director at L.C. Swain Middle School in Palm Beach County.  Mr. Ross has gained a reputation of building programs, as during his time at L.C. Swain, he was able to resurrect a previously stagnant program, improving student involvement and membership by an unbelievable 500%.  Mr. Ross has also had the opportunity to work with other successful programs such as Flanagan High School, Coral Glades High School, Jupiter High School (before becoming director), and the Majory Stoneman Douglas Eagle Regiment.

Mr. Ross previously served as the co-director and music caption head for STRYKE Percussion 2 earning a gold medal and fan favorite award their first year out in competition.  He has also marched with the WGI world class percussion ensemble STRYKE Percussion, gaining two open class silver medals, and he was a part of the promotion to World Class.

Mr. Ross prides himself on constantly seeking professional growth and development and attends workshops regularly to enhance his music practice and to stay current on the latest pedagogy. He has had the opportunity to work with  with renowned conductors such as Dr. Scott Lubaroff, Dr. Donald J. Mckinney, Dr. Robert Carnochan, and Mr. Steve Rivero.